The trajectories for a disproportionate number of early Mexican American civic leaders have been surprisingly similar: born into a working class family, these select individuals somehow defy the odds and obtain a good education, achieve middle or upper middle class standing, and then give back to their community through government service, often as advocates, service providers, or public officials. 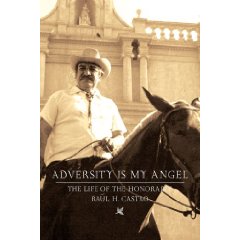 Adversity Is My Angel

Raúl H. Castro neatly fits into this pattern. The first and only Mexican American elected to be governor of Arizona, and a former U.S. ambassador, Castro was driven from an early age to excel, in part by the burning desire to exceed the expectations of those who perceived him as a poor Mexican boy growing up along the U.S.-Mexico border.

Castro’s autobiography, written when the recently retired attorney, politician, and diplomat was in his 90s, is moving and informative in its insights to his extraordinary life and times. Adversity Is My Angel: The Life and Career of Raúl H. Castro (Fort Worth, TX: TCU Press, 2009) leaves the reader satisfied despite a thin 138 pages that include numerous photographs.

Adversity Is My Angelworks because of Castro’s story. He graduated from high school in Douglas, Arizona, in 1935. Not only were work and career opportunities limited in the midst of the Great Depression, but Douglas was a segregated border town were Mexican and Mexican American boys routinely dropped out of high school to work alongside other family members.

Castro served as Arizona's first and only Latino governor.

He overcame multiple obstacles, affording college by cobbling together different funding sources; this included joining the Army National Guard that also required, as a prerequisite, that he become a U.S. citizen. Castro returned to Douglas to make money in the summer of 1937 and ended up helping to organize a local union affiliated with the CIO’s International Union of Mine Mill and Smelter Workers. Their driving vision went beyond simply raising wages, but to use the power of a collective voice on the job to end the all-too-common practice of treating Mexican American workers less respectfully than Anglo employees.

The seemingly most tragic period in Castro’s life occurred after he had achieved the long-sought college diploma: Douglas school district officials were not interested in hiring a Mexican American teacher, and so Castro, needing to eat but determined not to go back to mining, left town. For two years he stowed away in railroad boxcars as he crisscrossed the country in search of work. He boxed for a small purse in a number of cities; he picked crops in Idaho, Montana, Oregon, and California.

Not one to let adversity long have the upper hand, Castro found employment with U.S. State Department as part of the Foreign Service. He worked out of Mexico during World War II. Thereafter, he attended the University of Arizona Law School. Here, too, gritty determination proved vital to his advancement. He finagled a university job teaching Spanish, which he performed simultaneously with studying to become a barrister; this was both exhausting and prohibited by standing practice.

Castro’s elected career built on his legal experience and relationships. He won election as Pima County attorney in 1954, and then Superior Court judge in 1958. He narrowly lost his first race for Arizona governor in 1970, though doing well in a state that had become quite conservative, best known for its senator, Barry Goldwater. Castro won four years later as a conservative Democrat in the aftermath of the Watergate scandal that tarnished the Republican brand.

Castro seems most pleased by his work as an ambassador, which built on his earlier work in the Foreign Service and the skills acquired as an elected official.

President Lyndon Johnson named him as ambassador to Bolivia and Guatemala, and Jimmy Carter selected Castro as ambassador to Argentina. His recollections on his years abroad are telling for what they reveal about the man and the job, as well as the political convulsions in the region that included Marxist gorillas and the military’s dirty war in Argentina, where political opponents simply disappeared.

Adversity Is My Angel is a highly accessible, well-crafted, and timeless volume that is a must-read for anyone who enjoys a good biography or is interested in Latino politics.