From the Barrio to Washington (Via Sacramento)

The current interest in the Latino vote, and the emergence of high-profile leaders such as Antonio Villaraigosa, might lead one to ask: How did it all begin? Who were the early leaders? Part of the answer can be found in Armando Rodriguez’s From the Barrio to Washington: An Educator’s Journey, which fulfills the stated goal — “to inspire” — while teaching us about a bygone era. 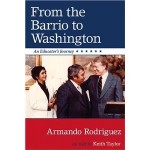 A first rate autobiography from a Mexican American civic giant.

The trajectory of Rodriguez’s life is awe-inspiring. Born into a large family in Mexico where his mother neither spoke English nor wrote Spanish, he became the second Latino college president and an adviser to four U.S. presidents.

Rodriguez is the most prominent San Diegan of the Mexican American generation, the cohort shaped by the Depression and World War II. He was among the first large wave of Latinos to come to California’s state capitol during Governor Pat Brown’s tenure, reaching national influence in the 1960s, 1970s, and 1980s.

Rodriguez grew up in the San Diego of the 1920s and 1930s, then a small city near the border. The Latino community was based in Barrio Logan; the largest employer was the tuna canneries, where young Armando worked and where his sister became a union organizer for the CIO’s UCAPAWA Cannery Workers.

Rodriguez experienced discrimination but always remained optimistic, confident that education provided the avenue to a better life. He also focused his efforts on opening doors for Latinos while embracing people from other ethnic and racial backgrounds.

His military service during World War II facilitated his becoming a U.S. citizen so that he could obtain the clearance to become a code breaker.

During the 1950s he helped organize the Community Services Organization (CSO), the dominant Mexican American civil rights organization in California. Through CSO he met César Chávez from San Jose, Dolores Huerta from Stockton, who went on to found the United Farm Workers, and other emerging Latino leaders who became Democratic Party activists and leaders in the Mexican American Political Association (MAPA), which was founded in 1960.

This was also the time he emerged as a political leader. He hosted a Viva Kennedy fundraiser at his home in 1960, featuring Ted Kennedy. Two years later he won the Democratic nomination for the state Assembly (with future Assemblyman Phil Isenberg as campaign manager).

As a Lyndon B. Johnson delegate to the 1964 Democratic National Convention, Rodriguez was among the first set of Mexican American Californians outside Los Angeles to be so honored.

The politically connected school administrator then did something that—for many—might have seemed out of character. He led the walkout against the federal Equal Employment Opportunity Commission that was meeting in Albuquerque, demanding the appointment of a Latino EEOC commissioner and insisting that the EEOC address Latino concerns.

President Johnson apparently did not bear a grudge because he soon hired Rodriguez to run a new Latino office at the Health, Education, and Welfare agency. In an ironic twist, Rodriguez got the Hearst family, whose newspapers had sensationalized the Zoot Suit Riots, to underwrite the development of federal bilingual education that Congress refused to fund.

In between service in the Nixon and Carter administrations, Rodriguez served as president of East Los Angeles City College.

This is a story both well told and worth telling. The narrative is straightforward and accessible, designed to capture the reader’s imagination; some parts will make you cry and some will make you laugh, while other sections are designed to transmit acquired wisdom.

The book is enriched by number a photographs: Rodriguez’s family, and Rodriguez with activists such as César Chávez and Corretta Scott King and with elected officials such Pat Brown, U.S. Senator Dennis Chávez, and President Jimmy Carter.

It is significant that Rodriguez, at age 87, decided to publish his autobiography. It fits well with the handful of books about other members of the Mexican American generation, most notably fellow Californians Bert Corona, Julian Nava, and Dionicio Morales. It also augments the academic literature, particularly Ignacio M. Garcia’s Viva Kennedy and Julie Leininger Pycior’s LBJ & Mexican Americans.

Still, some academics and political junkies will come away wishing Rodriguez had written more about the texture of political life in San Diego and the nation.

In this regard, I am fortunate to have interviewed Rodriguez for my own book, The Search for a Civic Voice: California Latino Politics.

From the Barrio to Washington would have benefited from mini bios of more of those individuals, such as Alfredo Salazar, who influenced Rodriguez’s life and the community in Barrio Logan.

Hired as San Diego’s first Latino firefighter after his service in World War I, Salazar became the pride of the Latino community with his elevation to San Diego’s fire chief, a post he held until his retirement in 1948, at which time he ran unsuccessfully for the state legislature.

An example of the book’s insufficient political context is Rodriguez’s meeting, at the 1964 Democratic Convention, Latinos from other states with roots in Central and South America and his deepening
understanding of the historic plight of white ethnics.

This experience resulted from his participation in the party’s nationalities division, a body set up under President Roosevelt to reach out to the foreign-born and their children. It emphasized coalition politics and produced the structure to court the once relatively small number of Latino voters.

Such quibbles aside, From the Barrio to Washington is a must-read for those seeking to learn about the past or to become inspired to create a better tomorrow.

This review first appeared in the California Progress Report on February 7, 2008.

One Response to From the Barrio to Washington (Via Sacramento)