The most prominent Hispanic elected official during the past decade was U.S. senator Mel Martinez from Florida. His life story, his ubiquitous presence on Spanish-language television, and his close association with President George W. Bush gave him a tremendous cache. 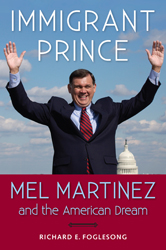 New biography tells a wonderful personal story and provides a powerful warning to the Republican Party on why they have trouble courting Hispanics.

A page-turner, Immigrant Prince is both heartwarming and coldly analytical in examining the man who, for many, came to encapsulate the American Dream as well as the failed Republican Party’s efforts to incorporate Hispanics into a “big tent.”

The story begins in Cuba in 1962 where, at age 15, Martinez bids farewell to his parents and friends and heads for the United States in one of the opening acts in a drama known as Operation Peter Pan, a now-famous resettlement program run by the Catholic Church.

But instead of being dropped off in the growing Cuban enclave of Miami, as was the experience of most Peter Panners, he was placed with Anglo foster families in Orlando, a central Florida community with few ethnic residents.

Martinez excelled in the Anglo world. He married his college sweetheart, Kitty, a Southern belle from Alabama, and became a U.S. citizen, a Democrat, and a successful trial attorney in Orlando.

Ronald Reagan proved decisive in Martinez’s switch to the Republican Party and to the rise of the Miami-based Cuban community.

With the help of newly organized Puerto Ricans who moved to central Florida, Martinez was elected Orange County chair in Orlando as a moderate to the officially nonpartisan post. He raised his profile in 1999 and emotionally connected to fellow Cuban refugees when he deftly invited the young Elian Gonzalez to join him at Disney World.

Martinez became more partisan and willing to adopt conservative positions as he rose in power and became the central figure in the George Bush–Karl Rove national Hispanic Republican outreach strategy.

He campaign alongside Bush in Florida during the 2000 election and the president-elect, knowing he would need Hispanic voters to be reelected, named him Secretary of Housing and Urban Development (HUD). As secretary, he focused on increasing minority home ownership and addressing Hispanic organizations.

The ultimate career test came on the issue of immigration reform in 2007. Following the failure of Kennedy-McCain, Martinez sought to craft a new bipartisan compromise with the active backing of the Bush White House. This reform effort was undermined first by House Republicans; instead of courting moderates and Hispanics, they tried to animate their conservative, anti-immigrant base for the 2008 election cycle.

Soon thereafter Martinez resigned from the Senate and as general chair of the Republican Party. He announced that he wanted to spend more time with his family.

Martinez’s decision not to complete a full term in the Senate represented a sad ending for an otherwise fabled career. The personal attacks he endured from fellow Republicans during the immigration debate also provided a powerful warning. Far too many conservatives remained hostile to efforts to woo moderate Hispanics.