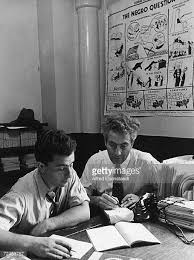 Moreau as he appeared in Life Magazine in 1937.

Albert Moreau provided the first radical Latino voice in the electoral arena in the Northeast when he ran for the state assembly in New York in 1929. Thirty-two at the time, Moreau was a veteran of the U.S. anti-imperialist movement of the 1920s. In New York, he helped found the Centro Obrera de Habla Española, or Spanish Speaking Workers Center, in Harlem; it became the headquarters for the Communist Party’s Latino outreach during the early days of the Great Depression. Moreau likewise provided a Spanish voice within the party, serving on the Central Committee of the CPUSA, and aiding the Communist struggle in Cuba during the early 1930s. For more on Moreau and and the Spanish Bureau see my journal article.

This entry was posted in Activist Profiles, Northeast and tagged Communist Party. Bookmark the permalink.