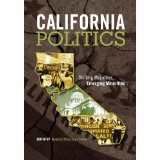 I am proud to write that Professor Robert Stanley Oden has included an essay of mine,  “Latino Los Angeles: The Promise of Politics,” in his new  anthology, California Politics: Shifting Majorities, Emerging Minorities (San Diego: Cognella Academic Publishing, 2011).

California Politics provides an important look into the history and current development of racial, ethnic, and cultural minority groups as well as coalition politics in the diverse state. Oden goes beyond the usually emphasis on Latinos, African Americans, and Asian Pacific Islanders to include an essay on Gays and Lesbians, a significant electoral and cultural force in the state.

Oden, in his introduction, describes my essay in the book thusly:

“The second chapter focuses on the city of Los Angeles and the region known as the Los Angeles Basin. Los Angeles is highlighted in this anthology for obvious reasons: it is the second largest city in the U.S. and its region houses close to 40% of the population in California.

“Economically, politically and culturally, Los Angeles sets the tone for the entire state and in many cases for the U.S. The influence of Los Angeles in the late 20th century, as a multicultural, mega-metropole with an enormous Latino population, is highly significant.

“The important political work of Edward Roybal is discussed, as well as the community organization efforts he led, and the Community Service Organization (CSO) which helped elect Roybal as the first Latino to the City Council since Gold Rush days.

Burt assiduously details the role played by Roybal and others in creating a Latino political machine in Los Angeles, a machine which had defeats as well as victories, and eventually created opportunities for the election of many prominent Chicanos to political office in Los Angeles and surrounding areas.

“Burt points to the election of current mayor Antonio Villaraigosa as evidence of the Latino-labor coalition forged by the late Miguel Contreras, the former head of the powerful Los Angeles County Federation of Labor.”