The Zoot Suit Riots: The View from Washington

For 10 days in June of 1943, soldiers and sailors stationed in Los Angeles targeted young Mexican Americans in the infamous Zoot Suit Riots. The clash is widely regarded as a symbol of racism, and a sign of World War II home front anxiety, as was antiblack rioting in Detroit and other cities during the same period. 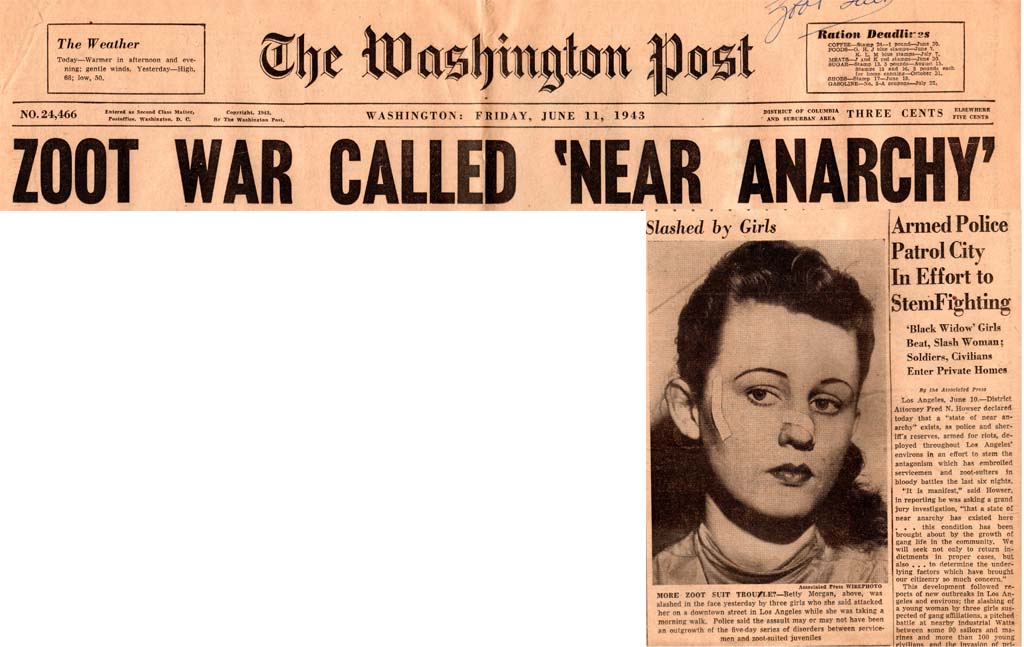 Historians have long stressed the role of sensational headlines in the Hearst-owned newspapers. It has also been noted that papers in Latin America covered the conflict, thereby complicating the U.S. Good Neighbor Policy at a time when the Allies were pursuing hemispheric unity against Nazi Germany.

Now, some 70 years later, a cache of documents has emerged that illustrate the wide coverage the event received in the nation’s capitol. Mrs. Hobart Bosworth—wife of the early Hollywood actor and an advocate for servicemen needing housing, recreational activities, and other basic services—saved a file folder full of articles that were made available to this writer. 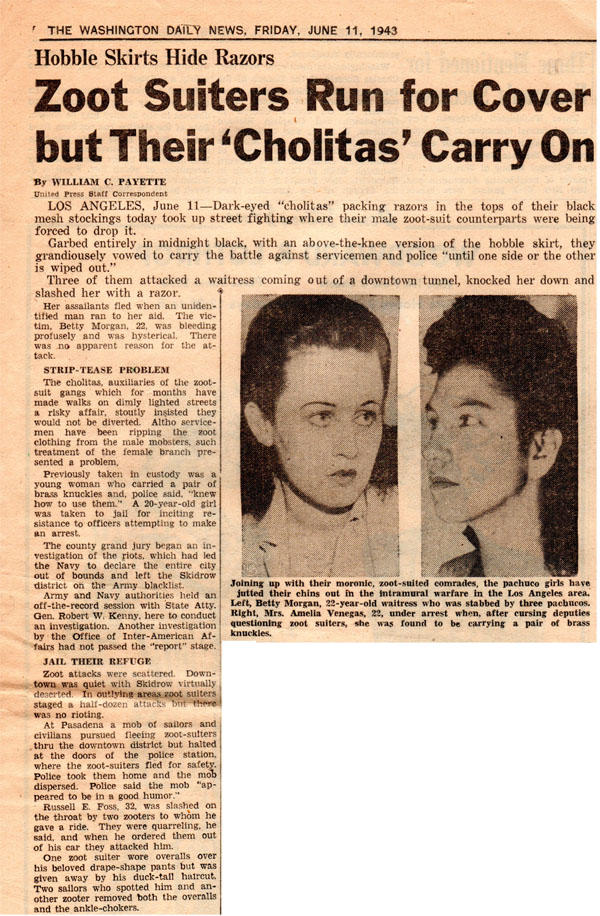 The Washington Daily News ran the most sensational headlines.

“High Officials Act to Halt Zoot Suit War,” an Associated Press story, made page 1 in the Washington Post on June 10, 1943 (the day before the banner headline pictured above). It citied a series of actions by government leaders at the local, state, national, and international level:

“Governor Earl issued an appeal for the ending of the rioting” . . . “In Washington, Rafael de la Colina, minister-counselor of the Mexican Embassy, expressed indignation” . . . “Mayor Fletcher Bowron of Los Angeles said he had been telephoned by the State Department in Washington.”

The following day, the Post, one of several newspapers in the capital city, editorialized on the situation based on reported information. The paper posited that the core problem was economic and not racial, but acknowledged that the riots had already complicated international relations. Furthermore, the paper, while assuming the root cause of the problem as juvenile delinquency, did express concern when “vigilantes wear uniforms” and unflatteringly compared the disturbances with “uniformed rowdies in Italy, Germany and elsewhere.”

Here is the Washington Post editorial, “Zoot Suit,” in its entirety:

“The West Coast naval authorities have, it seems to us, shown great wisdom in their decision to make the whole city of Los Angeles forbidden territory to sailors on shore leave. This has followed the recent disorders between servicemen and gangs of fantastically clad young muggers. If the stories of assault, robbery and mayhem are correct, it would seem that the soldiers and sailors had plenty of provocation. It would also seem that they began to take reprisals only after the mugging had got beyond the control of the local police.

“All the same vigilantism is a dangerous form of correction, especially when the vigilantes wear uniforms and act on their responsibilities. The muggers, too, wear a kind of uniform called a zoot suit, which enables the outraged sailors to distinguish them from presumably peaceful civilians. And yet it is conceivable, though incongruous, that the wearer of a zoot suit might be otherwise inoffensive and law abiding. Nevertheless, the Los Angeles City Council has now decreed the wearing of a zoot suit to be a misdemeanor punishable by a 30-day jail sentence. The constitutionality of such an ordinance is doubtful, since it sounds like depriving citizens of the use of property without due process of law. Moreover, it is difficult to see how the ordinance will help matters much, since the Army and Navy cannot be expected to complicate the job of their military police and shore patrols by removing the uniforms from enlisted men on leave.

“The whole situation is full of explosive possibilities. It suggests a quasi-anarchic state of affairs, and too easily recalls the street fighting between groups of uniformed rowdies in Italy, Germany and elsewhere. As far as we can discover, the Los Angeles rioting has no political overtones, but it might easily and quickly acquire them. A large portion of these zoot-suit muggers are young Mexicans and young Negroes, a fact which has already produced unpleasant international repercussions. This racial complication is merely incidental. It mainly arises because the economic situation of the Mexican and Negro elements of Los Angeles offers a most favorable milieu for that increase in juvenile delinquency which has been noted in nearly all sections of the country.

“Thus it is well to remember that the phenomenon of muggerism is by no means confined to Los Angeles and that it is reported in parts of the country where there are no Mexicans and few Negroes, and that it constitutes one of our most formidable national problems.”

The CIO (Congress of Industrial Organizations) was one group with political influence in Washington to side with the Mexican American community in the conflict. The CIO had aggressively organized Latino workers in a variety of industries, from canneries to mines to maritime trades, and had helped organize the Spanish Speaking Peoples Congress in 1938.

CIO President Philip Murray, acting at the request of the Los Angeles CIO Council (with Jaime Gonzalez Monroy heading its civil rights committee), stated in a letter to President Roosevelt:

“The agents of our enemies in this country and in our allied nations of Latin America are already making full use of these shameful outbreaks of in their propaganda against us and against the cause of the United Nations. They are pointing to the treatment of citizens of Latin-American extraction and of Negroes to bolster their claim that the United States is not sincere in its war aims or in its professions of friendship and quality among nations.”

Murray was quoted as saying that the situation in Los Angles warranted the president’s “personal attention.” In “CIO Asks President Act in ‘Zoot’ Cases,” New York Times, June 20, 1943, the national labor leader called upon numerous federal agencies and bodies, including the Department of Justice, Office of War Information, and the Office of the Coordinator of Inter-American Affairs to engage the issue.

The CIO’s basic argument, extolled in greater detail in issues of the Labor Herald in Los Angeles, was that the unrest was instigated by foreign saboteurs seeking to disrupt wartime unity. This argument had the advantage of not applying the racist label to U.S. troops at a time when labor was rallying support for the war effort.

For those interested in learning more about this dynamic period, here are the relevant citations:

“CIO Asks President Act in ‘Zoot’ Cases: Murray Lays the Riots on Los Angeles to an Enemy Plot to Foment Racial Outbreaks; LOOKS TO LATIN AMERICA: And There, He Says, the Axis Pushes Its Claim We Are Not Sincere in Equality Talk,” New York Times, June 20, 1943, p. 14.