When I was growing up, the mention of crooner Frank Sinatra conjured up images of Las Vegas, the Rat Pack, and—to the extent politics came into the picture—the glamour associated with President Kennedy and his bother-in-law Peter Lawford. 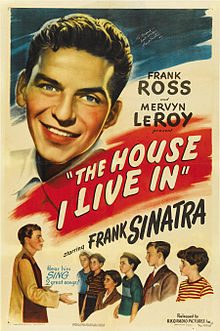 Sinatra’s political associations became more conservative as part of the backlash against the counterculture. He backed Nixon’s 1972 reelection.

Imagine my surprise when I learned that his song, “The House I Live In,” served as an anthem of the multicultural, post-World War II left.

Such are the joys of research.

It started with a small notice from 1948. Under the predictable headline, “Idol of the schoolgirls,” La Prensa, New York City’s Spanish-language daily newspaper, ran a photo of the young Sinatra and reported that he would appear at a theater on 125th Street, not far from Spanish Harlem, as the cultural center of Latino New York was then known.

Archival research showed that in the previous year, 1947, the Cervantes Society, a fraternal order affiliated with the International Workers Order (IWO), had shown a film of Sinatra singing “The House I Live In” as part of its cultural program.

Image the setting. Five hundred Latinos gathered for the national meeting of the largely Puerto Rican fraternal society in New York. Leoncio Peña, editor of Liberación, spoke, as did society president Jesús Colon, recognized by historians as an icon within El Barrio.

The cultural program included fifty children dressed in the clothes of their ancestral homeland, including Cuba, Haiti, Panama, and Puerto Rico. The group then showed the movie.

At a time when some associated Americanism with being white, Protestant, and middle class, Sinatra created a more populist image of the U.S. as incorporating the working class and people of all races, religions, and ethnicities.

His song, “The House I Live In,” included these lines: “The grocer and the butcher, and the people that I meet / The children in the playground, the faces that I see /All races and religions, that’s America to me.”

The short movie was released in 1945 and written by Albert Maltz and produced by Frank Ross and actor Frank Sinatra to oppose prejudice at the end of World War II.  It received a special Academy Award in 1946.

About the same time the Cervantes Society was showing the movie short in New York City, the Committee for the Organization of the Mexican People (COMP) was screening it in El Paso, Texas.

COMP’s short-term political objective was to motivate Mexican Americans to pay the poll tax, the prerequisite of voting for one of their own for public office.

These largely forgotten organizations and a little-remembered movie connected Latino activists to each other and to the larger progressive community after World War II, with its wartime Fair Employment Practices Commission and the extreme example of theories of racial superiority espoused by Nazi Germany.

For some, it may also provide a new perspective on Sinatra and the efforts of early Puerto Rican, Mexican American, and other Latino activists to create a more just society.

The Hollywood-produced short is viewable via this link.

For more on the origins of the Spanish-speaking IWO lodges, see “The Communist Party’s Spanish Bureau, Founded in 1929.”

One Response to Frank Sinatra, Latinos, and Civil Rights