Spanish-born artist Julio de Diego lived in New York and then Chicago. He was the sole Hispanic to sign the 1935 call for the left-led American Artists Congress that opposed European fascism that soon engulfed the Spanish Republic in a brutal civil war. The following year, 1936, he designed a mural, “Fruits of Nature,” for the post office’s Fort Sheridan Station in Chicago. He also designed sets and costumes for the dramatic production, “The Wild Cat,” in Tampa, Florida. 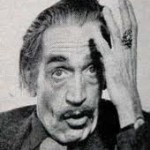 Xavier Gonzalez was a Spanish American who painted murals in two post offices in Louisiana. After leaving Spain, he lived in Argentina and Mexico before entering the United States, where he taught at a number of institutions, including Tulane University in New Orleans. He painted “Strawberry Farming” in the post office in Hammond in 1937, and “Tug Oil Industry” in Covington in 1939.

This entry was posted in Activist Profiles, Midwest, South and tagged Art. Bookmark the permalink.