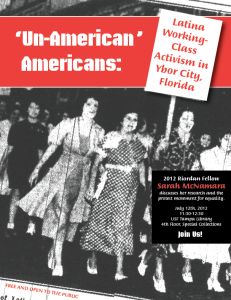 Interesting lecture on little known Latina activism during the 1930s.

“Un-American Americans: Latina Working-Class Activism in Ybor City, Florida” was the topic of a recent talk at the University of South Florida.

The program focused on female cigar makers of Cuban and Spanish ancestry who were animated by opposition to the rise of fascism in the Spain. The Spanish Civil War served as beginning of World War II.

Luisa Moreno served as the key Latina organizer in Tampa during this period.

Readers might also be interested her speech to the California CIO Council more than a decade later as she faced persecution from the federal government for her radical labor politics.