The American Labor Party served as the second New Deal party in New York. It was formed as a way for progressive, union-oriented activists to support President Roosevelt without becoming part of the Irish-led Tammany Hall political organization. 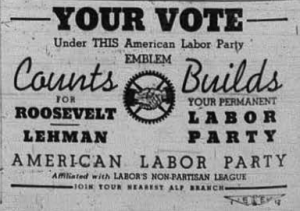 Between 1936 and 1948 it served as the voice of the left-led CIO municipal in New York City, where it mobilized working class voters and strategically reached out to Puerto Ricans in Spanish Harlem and other neighborhoods.

The ALP supported Roosevelt in 1936, 1940, and 1944. In 1948, it backed Henry Wallace, Roosevelt’s second vice president, who ran for president as the titular head of the Progressive Party.

The ALP backed the successful election of Oscar García Rivera, a native of Puerto Rico, for the state assembly in 1937 and and 1938. He lost reelection in 1940. 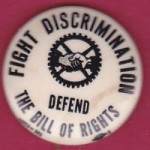 I am currently researching this period and would appreciate hearing (via email) from “old-timers”who participated in the ALP or people who have ALP related images to share, particularly related to candidates, rallies, and organizations in Spanish Harlem.