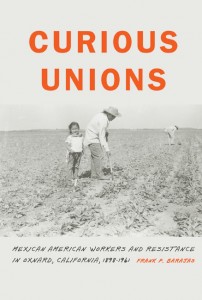 History begins with stories, and a prime example of this is Frank P. Barajas’s new book, Curious Unions: Mexican American Workers and Resistance in Oxnard, California, 1898-1961 (University of Nebraska Press, 2012).

Oxnard, a largely agricultural town located more than an hour’s drive north of Los Angeles, is the setting for the author’s first book, a delightful meal for the mind that leaves the reader hoping for a second dish that will cover the last fifty years, from 1962 to the present.

The town bears the name of Harry Oxnard, a sugar beet king and one of three brothers to establish a dominant presence in the area. Prior to World War II, sugar beets served as the nation’s prime source for sugar; thanks to the rich coastal soil, Oxnard produced particularly sweet beets.

The story begins, however, with the Chumash Muwu, the area’s Native American people, and their “discovery” by the Spanish explorer Cabrillo.

Subsequent arrivals from distant lands produced a community that was both Mexican American and multicultural, with Japanese, Filipino, African American, and white ethnic residents.

In an example of cross-cultural unions, Mexican and Japanese beet workers joined together to strike in 1903; however, three decades later, in 1933, a Communist-led strike involved mostly Mexicans. 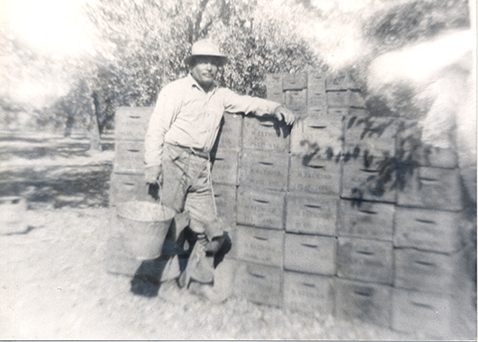 The author's grandfather circa 1940. Stories of struggle and hardship served as the foundation of this important regional history.

Curious Unions is a well-written story that should be read by every new Oxnard resident seeking insights into his or her surroundings, and by students and scholars looking for a case study to better understand the larger currents of history.

Oxnard has a special place in Latino labor and political history. It was here in 1959 that a young Cesar Chavez, then executive director of the Community Service Organization, sought to organize farm workers in alliance with the United Packinghouse Workers. As Bajaras notes, his experiences in Oxnard served as the foundation three years later for the organization of the United Farm Workers.

Barajas includes a number of political and politically driven policy references. For example, Governor Culbert Olson, a progressive Democrat who served a single term from 1938 to 1943, established a “fair wage policy”—and refused to deny relief if growers offered wages below a minimum level.

This strengthened the bargaining power of food unions, and in 1941 the American Federation of Labor-affiliated Agricultural and Citrus Workers Union struck. Among those who walked off the job: the author’s grandfather, Frank V. Barajas.

The growers sought to crush the union; their strategies included evicting strikers and their families from company-owned camps.

Governor Olson sought to support the strikers. He temporarily suspended the evictions until Roosevelt’s Farm Security Administration (FSA) could build a more welcoming camp to house the displaced families and the State Relief Administration (SRA) was able to provide financial assistance for food and utilities.

Ultimately, the strike failed, in part because of the growers’ power and the (racially motivated?) disunity within organized labor: the AFL Teamsters, representing truck drivers, refused to uphold their commitment to avoid the “hot cargo.”

1941 was important for a second, related reason: the start of the bracero program, designed to bring Mexican field workers into the state and nation to alleviate wartime labor shortages.

Barajas notes that the program was initially administered by the FSA, a New Deal agency sympathetic to workers. But in 1943 growers successfully lobbied Congress to move the program into the War Powers Administration. Carey McWilliams described this as “tantamount to turning the whole program over to the farm associations.”

Latinos and liberals like McWilliams and Eleanor Roosevelt believed that the bracero program had veered from its initial intent (and worker protections), while unions believed that ending the bracero program was a predicate for unionization. On the other hand, growers claimed that fewer U.S. citizens were willing to pick crops and that this necessitated a steady stream of braceros.

The underlying power struggle reached its zenith in the late fifties and early sixties during the first term of Governor Pat Brown, and the end of the Eisenhower and beginning of the Kennedy administrations.

In one of a number of observations on identity and relationships, Barajas notes that this produced a conflict between Mexican heritage workers—with U.S.-born Mexican Americans pitted against those imported from Mexico to work the fields.

The book makes a number of insights related to the title phrase “curious unions” that deepen and extend our understanding of the role of Mexican Americans as both outsiders and insiders, not fully integrated into community life, yet essential to the area’s economic engine, agriculture, and part of the city’s social fabric.

The author introduces a pantheon of ethnic pioneers who assumed prominent roles as labor, business, and fraternal leaders, including Victor Martinez, the owner of the Independent Oxnard Theater, and Robert Hinostro, the city’s first Latino police officer.

Despite its importance, agriculture was not the only job-providing industry. The federal government played a major role in diversifying the local economy—and expanding the population—in a series of World War II-related developments. The federal government developed Port Hueneme as a deep-water port in 1939; established the Maritime Commission School, to train Merchant Marines, in 1940; and found the Cal-Aero Academy, to train Navy officers, in 1941.

Finally, on a personal note, Barajas’s work is a wonderful tribute to his grandfather, who is pictured on page 180, pail in hand, standing in front of stacked lemon crates circa 1940.

As he acknowledges at the book’s conclusion: “The foundation of Curious Unions lay in the stories passed along casually in conversation with friends and family as well as formally in the form of oral-history interviews.”