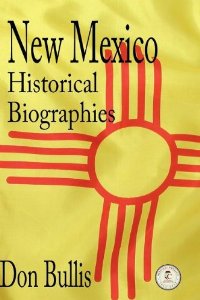 On my last trip to Santa Fe, I came across a book that has proven to be both interesting and useful: Don Ballis’s New Mexico Historical Biographies (Rio Grande Books, 2011).

The book reflects the author’s encyclopedic understanding of the state’s history, and it is not primarily about politicians. New Mexico Historical Biographies was prepared for the New Mexico Centennial Project with support from the New Mexico Department of Cultural Affairs.

But the reader will also learn about less prominent New Dealers, such as Latina Maria Adelina Otero-Warren. She served in a number of roles: state director of the Civilian Conservation Corps (CCC), head of the state’s Literacy Education Project, and director of Adult Literacy in Puerto Rico.

Apropos of a state with 400 years of political history, there are profiles of selected governors from the Spanish period, the Mexican period, the U.S. territorial period, and the hundred years since statehood was achieved in 1912.

New Mexico Historical Biographies is recommended for university libraries and those individuals doing research into state history—and for readers who enjoy learning about interesting people who have helped shape an interesting state.

This entry was posted in Uncategorized. Bookmark the permalink.

One Response to New Mexico Biographies