Humphrey Reached Out to Latinos and Ethnic Americans

In 1968, Citizens for Humphrey produced the first multicultural campaign button. Replete with images of voters from various ethnic and racial backgrounds, the political item reflected the candidate’s strategic effort to forge an alliance similar to the earlier campaigns of Franklin Roosevelt and John Kennedy. 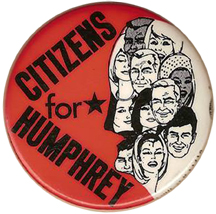 Citizen for Humphrey sought to assemble a multicultural coalition.

Latinos were part of the Humphrey campaign from its beginning in spring 1968. Cristobal P. Aldrete of Austin, Texas, served as the top Latino staff person. A member of the GI Forum, he moved from the Democratic National Committee, where he served as the chairman’s special assistant for Mexican-American and Spanish Speaking Political Affairs, to the Humphrey campaign.

United Democrats for Humphrey, the primary campaign organization, listed two Spanish-surnamed individuals among the twenty-four names on its stationery: Alfonso J. Cervantes and Henry B. Gonzalez. Cervantes, mayor of St. Louis, was the grandson of a Spanish immigrant, and Gonzalez, a Mexican American, represented San Antonio, Texas, in Congress. He was elected in a special election in 1961 with the political assistance of the Kennedy-Johnson administration.