President John F. Kennedy named postal clerk Jose Gonzalez as the first Spanish-speaking postmaster of Tampa, Florida. He served from 1962 until 1975, rising in the ranks to become head of the Tampa Sectional Center, which gave him oversight of seventy-one post offices in Western Florida.

Gonzalez’s parents emigrated from Spain to Tampa, where they found work in the cigar industry. Gonzalez was part of Viva Kennedy in 1960. The appointment made him one of the highest-profile Spanish-speakers in the city. As a prominent civic figure, Gonzalez served in a number of civic positions, including as the president of the Centro Asturiano de Tampa, a fraternal club started in 1902 to provide social activities for Spanish Americans in the cigar industry.

Shortly after his death, President Jimmy Carter appointed his son, Jose A. Gonzalez Jr, to became U.S. District Judge for the Southern District of Florida.

It was quite a trajectory: from immigrant cigar maker to federal judge by way of the post office. 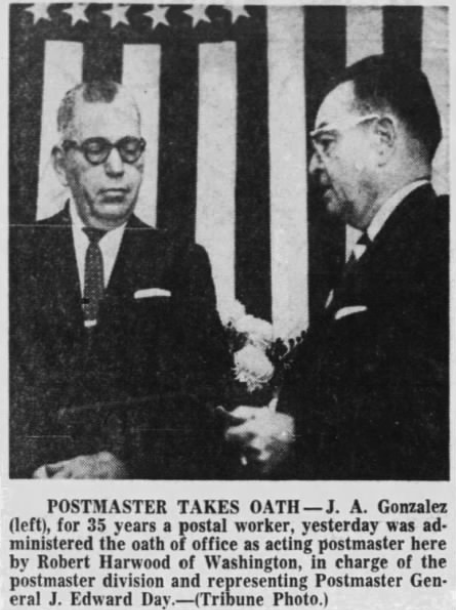 This entry was posted in Activist Profiles, South. Bookmark the permalink.