Biographies in academia are increasingly rare, particularly for scholars seeking to highlight the collective voice in ethnic and working-class history. The form works well in James J. Lorence’s Palomino: Clinton Jencks and Mexican-American Unionism in the American Southwest. 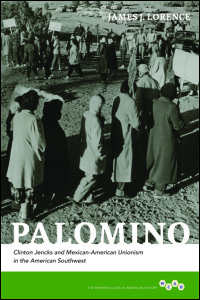 Clinton Jencks is credited for empowering subjugated Mexican American hard-rock miners in Grant County, New Mexico. Local 890 of the Mine, Mill and Smelter Workers (Mine-Mill), for which he served as president, is best known for its role in the classic 1954 labor film, Salt of the Earth. The miners, or more precisely their wives, emerge as the resolute heroes of a bitter strike seeking economic and racial justice by raising wages and ending the “dual wage” system, whereby Mexican Americans earned less than Anglos on the job and faced discrimination in the community.

Jencks was shaped by his parents’ commitment to the Social Gospel prevalent during the Progressive Era and his coming of age during the Great Depression. He sought to change the world by joining the Communist Party. His penchant for activism expressed itself largely through leadership in a series of broad-based, progressive organizations in the thirties, forties, and fifties: most notably the American Youth Congress, American Veterans Committee, and Mine-Mill.

Mine-Mill began as the Western Federation of Miners, once an IWW affiliate, before turning to the American Federation of Labor (AFL). Mine-Mill achieved its greatest success as a left-led member of the Congress of Industrial Organizations (CIO) during President Franklin Roosevelt’s New Deal of the 1930s and 1940s.

Lorence quotes Arturo Flores as saying the union was “the only vehicle that protected us from discrimination.” This helps explain the workers’ loyalty to each other and the use of the union as a vehicle for social change. This is significant because Roosevelt’s Fair Employment Practice Committee, established by executive order during World War II, had only a limited impact in the mines of New Mexico and Arizona. The mine owners also represented an early version of global capitol, with property in the United States, Latin America, and Africa—able to absorb losses in one location in order to alter the balance of power on the job.

For those interested in the fight for social justice and development of labor and community coalitions, this is an important read. Jencks is credited with expanding the union’s vision beyond what labor or the left then regarded as necessary or possible: He supported a much greater role for women in the all-male union, encouraging the formation of a women’s auxiliary and arguing for an ongoing role in union affairs. He advocated for community engagement through forming a local unit of the Committee on the Organization of the Mexican People. COMP was designed to organize along ethnic lines and to address community and labor concerns.

Reading this book was a pleasure because of its general subject content and my well wishes toward the author and the subjects. James Lorence and I shared a conference platform at the University of Iowa where he presented the paper that served as the foundation for his book. That essay (and my own) appears in Shelton Stromquist’s anthology, Labor’s Cold War: Local Politics in a Global Context. Key sources for Lorence’s book—the leaders of the Salt of the Earth strike—were likewise generous with their time in helping me better understand labor and Latino politics in the 1940s.

Finally, labor and social history scholars—and those interested in the mining industry—owe a huge debt to Jencks because during his postlabor organizing years as an academic, he collected the papers of far-flung local unions of Mine-Mill, which could have been lost when the numerically smaller organization folded into the United Steel Workers in the late 1960s. These archival documents are available at the University of Colorado at Boulder. They help ensure an enduring understanding of western labor radicalism and, in the case of Local 890, the role of Mexican Americans in labor and society in Grant County, New Mexico.