Appointments of Latino political activists were limited in the United States at this time. Otreo’s rise likely reflected his family ties. His uncle, Solomon Luna, was one of the richest people in New Mexico and a longtime member of the National Republican Committee. This was a time when 70 percent of the state’s Latinos, who largely identified as Spanish Americans, registered with the party of Abraham Lincoln.

The state Republican Party formally nominated Otero for governor in September 1924. Voters responded enthusiastically to the campaign, as did a number of newspapers.

Several thousand animated supporters rallied to welcome him home to Albuquerque after receiving the nomination. He stated, “I am not so vain as to assume that in the short term of two years as chief executive I can cure all the ills that afflict humanity, but I intend to give you such an administration as will bring credit upon the Republican Party and rebound to the glory of this state.”

On the Sunday before the Tuesday election, the Albuquerque Morning Journal gushed about the nominee on its editorial page. “If elected, Manuel Otero will conduct the affairs of the Governor’s office in the clean, honorable, upright manner which he has shown throughout the campaign and which has brought him a support regardless of affiliation.” 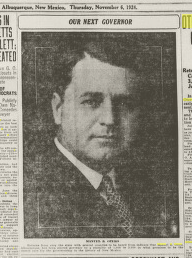 The Albuquerque Morning Journal declared Manuel B. Otero the victor shortly after the election.

Otero turned out his supporters and the Albuquerque Morning Journal declared him the victor. “Our next governor,” the paper proclaimed the on its front page on November 6, 1924. “Returns from over the sate with several counties to be heard [from] indicate that Manuel B. Otero, Albuquerque, has been elected by a plurality of 1,000 to 3,000 in what promises to be the closest vote in the history of New Mexico.”

“Ten days have gone by since election day, Nov. 4th, and still the results of the election on the governorship are in doubt,” reported the Roswell Daily Record. “The official count on the votes from Quay County gave Hannett 185 more than he was given on the unofficial count. This wiped out the slim lead held by Manuel Otero and puts A. T. Hannett in the lead by 111 voters.”

The alleged shenanigans in counting and reporting the ballots led Otero to charge that he had lost due to voter fraud. Otero filed charges to overturn the election results, but he ultimately dropped what might have proven to be drawn-out and costly litigation. He remained active in politics but never again ran for governor.

This entry was posted in Activist Profiles, Southwest and tagged Republicans. Bookmark the permalink.