The palm card is one of the political communication tools that has been lost as voters bought automobiles and stopped commuting to work on streetcars.

The palm card is a 2 x 3 inch mini-leaflet that literally fit into the palm of your hand.

This two-sided palm card was distributed as part of Richard Ibañez’s campaign for judge in Los Angeles in 1948. It is packed with information.

The front side of the card included the candidate’s name, photo, office sought, and campaign theme. 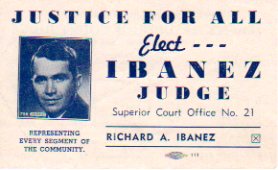 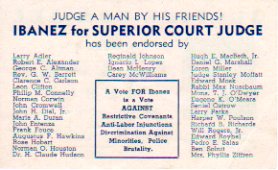 Richard Ibañez emphasized his broad-based appeal by listing a diverse collection of supporters on the backside.

The campaign theme of “Justice for All” was reinforced with this powerful message: “A Vote FOR Ibanez is a Vote AGAINST Restrictive Covenants, Anti-Labor Injunctions, Discrimination Against Minorities, Police Brutality.”

Richard Ibañez lost the 1948 judicial election, but was appointed to the bench in the 1960s by California Governor Pat Brown.