Salt of the Earth film and discussion

Salt of the Earth portrays the Empire Zinc strike miners in New Mexico that turned into a celebrated historic struggle for Mexican American and women’s equality. It was shot on location in 1953 by blacklisted filmmakers. 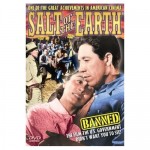 Salt of the Earth movie poster

The miners were members of the CIO’s International Union of Mine, Mill and Smelter Workers (IUMMSW) Local 890. The politically active union was among the first to address the problem of discrimination on the job and in the community.

Last summer I traveled to the Silver City, New Mexico mining district to get a better feel for the strike and to research the union’s political activities during the 1940s.

The trip included a wonderful visit with Art Flores, one of the surviving union leaders during the strike. Flores, a World War II veteran, later served as an elected official in New Mexico. His stories of racism and economic hardship in the mines and in the community were so compelling that I will never watch the movie the same way. 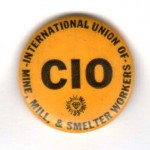 I also had the honor to speak with striker and retired union leader Lorenzo Torrez on my last visit to Tucson. Hopefully he will attend the upcoming film showing and discussion, which will be led by veterans of the strike and the film.

This special showing will be held Saturday, March 6, 2010, at 2 p.m., at the Salt of the Earth Labor College, a unique community space named after the movie. It is located at 1902 Irene Vista, Tucson, Arizona.

For those who can’t make it to Tucson, you can see this important movie on YouTube.

Readers might also enjoy James J. Lorence’s The Suppression of Salt of the Earth: How Hollywood, Big Labor, and Politicians Blacklisted a Movie in the American Cold War.

This entry was posted in Books, Southwest, Unions, Veterans and tagged CIO, IUMMSW. Bookmark the permalink.

2 Responses to Salt of the Earth film and discussion