Latinos con Eisenhower: “Me Gusta Ike” or “Yo Quiero Ike”

Dwight D. Eisenhower was the first Republican presidential candidate to reach out to Latino voters. 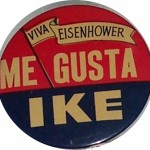 Latinos con Eisenhower operated out of a national headquarters in the Shoreham Hotel in Washington, D.C. in 1952. The campaign stressed the themes of representation, justice and opportunity.

John A. Flores served as the national director. His business card in the Eisenhower presidential library and archives in Kansas indicates that Flores was a public relations counselor with offices in Mexico City, Washington, D.C. and Phoenix, Arizona.

Latinos con Eisenhower believed that President Truman’s razor thin margin over Thomas Dewey in 1948 showed that they could impact a close election by increasing voter turnout and by getting normally Democratic voters to back the Republican nominee.

The campaign slogan, "I Like Ike," translated into Spanish.

Flores’ initial plan focused on Florida, Illinois and New York, plus twelve western states, including Utah and Wyoming, with small Spanish-speaking populations based in agriculture and mining.

Eisenhower once again courted Latinos in his 1956 reelection. He spoke favorably about the need for immigration reform and the archives includes correspondence with the Spanish-American Political Association of Newark, New Jersey.

In California, the Latin American Division of the Eisenhower-Nixon committee established 173 local support groups. They collectively distributed more than 100,000 fliers either through the mail or via “small businesses and churches of different denominations.”

Prominent Los Angeles businessman Armando G. Torres chaired the group’s Democratic committee. A post-election report stated: “80% of the 1956 campaign was dedicated to operate among the Latin American segment of the Democratic Party.”

Eisenhower’s popularity among Latinos grew out of his role as Roosevelt’s Allied Commander in World War II. The other factor in the 1952 and 1956 elections was that Democrat Adlai Stevenson did not aggressively reach out to Latino voters.

One Response to Latinos con Eisenhower: “Me Gusta Ike” or “Yo Quiero Ike”