Segments of the Latino community, like the larger population, have periodically operated outside the two-party political system.

As previously noted, La Raza Unida sought to create a third party for Chicanos—mostly younger Mexican Americans—in the Southwest and Midwest in the late 1960s and early 1970s. 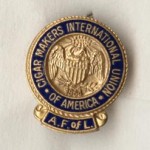 Less well known are the earlier third party activities of a variety of Latino groups in the Northeast, most notably in New York.

The cigar makers were skilled craftsmen from Puerto Rico, Spain, Cuba and other nations. They held a strong working class analysis and shared an international orientation.

They supported Robert “Fighting Bob” La Follete’s 1924 Progressive Party presidential campaign along with the American Federation of Labor and the Socialist Party. The Wisconsin senator won 17% of the national popular vote.

Twelve years later, in 1936, progressives faced a dilemma. Should they form a third party based on the earlier farmer-labor coalition? Or should they back Franklin Roosevelt’s reelection and try to make the Roosevelt-led Democratic Party even more responsive to their interests?

Most progressives ultimately followed CIO president John L. Lewis’ leadership and pitched in big time for FDR. This helped make 1936 a rare realigning election and in the process created the modern Democratic Party.

The CIO formed Labor’s Non-Partisan League (LNPL) to mobilize workers for Roosevelt on the basis of issues and not party. 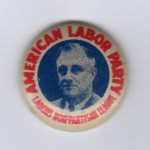 The American Labor Party and Labor's Non-Partisan League both appear on this 1936 Roosevelt pin worn in Spanish Harlem.

The problem in New York was that reformers wanted to become part of the Roosevelt coalition, but to remain apart from Tammany Hall.

Under the leadership of the garment unions, progressive labor formed a new third party, the American Labor Party. The ALP endorses Roosevelt, providing the president votes from ALP as well as Democratic voters. But the new party decided to run a number of its own candidates for congress, state assembly and city council.

The ALP also functioned as the LNPL state affiliate in 1936 and the political arm of the inchoate CIO state and municipal councils in New York.