Ernesto Galarza is deserving of a full-length biography. The most influential non-elected Latino in Washington, D.C. during the Roosevelt years, Galarza did more than anyone during the fifties and early sixties to get Congress to end the bracero program, which served as a precursor to the successful farm labor union drives by Cesar Chavez and the United Farm Workers. 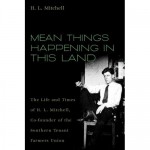 Thanks to the University of Oklahoma Press, readers have regained access to a mostly forgotten part of Galarza’s amazing career: organizing farm workers under the aegis of the AFL’s National Farm Worker Union. The NFWU grew out of the Southern Tenant Farmers Union and expanded into California. The union enjoyed ties to the Socialist Party of Eugene Debs and Norman Thomas.

The material on Galarza lies in H.L. Mitchell’s Mean Things Happening in This Land: The Life and Times of H.L. Mitchell, Co-founder of the Southern Tenant Farmers Union. The university press has released the formerly out-of-print book with a foreword by the late Michael Harrington and a preface by Samuel Mitchell.

Mean Things Happening in This Land sheds important light on Ernesto Galarza, farm labor organizing, and the tension between Socialists and Communists with the CIO’s United Cannery, Agricultural, and Packing Allied Workers of America (UCAPAWA), of which Southern Tenant Farmers Union was briefly part.

My review of Mean Things Happening in This Land appears in a recent issue of the Labor Studies Journal. See my website for additional reviews, articles and video.

This entry was posted in Books, California, Unions and tagged UCAPAWA/FTA, UFW. Bookmark the permalink.