Cruz Reynoso, the first Latino on the California Supreme Court.

Cruz Reynoso: Sowing the Seeds of Justice is a compelling portrait of former California Supreme Court Justice and winner of the Presidential Medal of Freedom. Abby Ginzberg produced the documentary film.

Reynoso personifies the Mexican American generation in California. A former farm worker, he served in the military and then went to college and law school at UC Berkeley. After graduation, Reynoso moved to El Centro, a small agricultural community not far from the California-Mexican border.

While in Imperial County in the 1950s and early 1960s, Reynoso became a leader in the Latino community, first in the Community Services Organization (CSO), and then in the Mexican American Political Association (MAPA).

Reynoso followed Roybal into the Mexican American Political Association. He won the Democratic nomination for the State Assembly from Imperial County in 1962.

Governor Pat Brown, seeking to demonstrate an affinity with the growing Mexican American community, appointed Reynoso as a personal assistant, and Reynosos appeared in Brown’s reelection material in 1966. 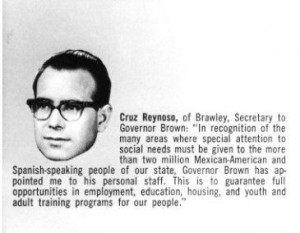 Cruz Reynoso was one of four Mexican Americans featured in a Governor Pat Brown reelection brochure in 1966.

The CRLA’s legal representation of those who had never before had an attorney provoked a backlash from powerful growers and their allies, including Governor Ronald Reagan.

The film, Cruz Reynoso: Sowing the Seeds of Justice, focuses on the conflicts in which the soft-spoken professor played a dramatic role.

Reynoso’s career as both lawyer and judge intersects with key moments in the country’s political history: the ugly recall campaign against three State Supreme Court justices; the fight for legal services for farm workers in the early 1970s in the face of Governor Reagan’s unrelenting attacks; and the U.S. Commission on Civil Rights’ investigation of voting irregularities in Florida during the 2000 Presidential election.”

Reynoso is currently touring California with the film and producer Abby Ginzberg. 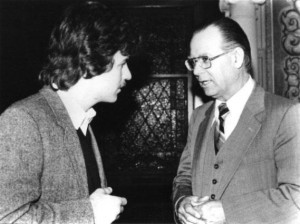 Justice Reynoso and this author in 1982.

Reynoso will arrive in Sacramento on Tuesday, April 6, 2010 for a special screening at the Crest Theatre, 1013 K Street. The California Latino Legislative Caucus is cosponsoring the screening, which will be followed by a panel discussion. Tickets are free but must be reserved online by calling (530) 754-5335.