The United Railway Icemen’s Union sought to organize the people who produced the ice for the refrigerated cars that took produce to market.

One of the few written records of this organization can be found in Mary Heaton Vorse’s Labor’s New Millions: The Growth of a People’s Power. The book was written in 1937 as the CIO was chartering a variety of new unions in the afterglow of the triumphant 1936 presidential election. 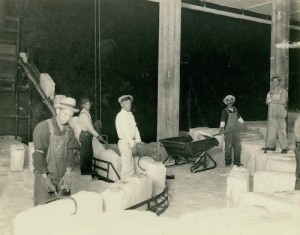 Workers at the PFE plant in Roseveille move ice blocks along a conveyer belt from the storage room to the railroad car. Photo courtesy of the Roseville Historical Society.

The largest ice producer in California was the Pacific Fruit Express (PFE), a joint operation of the Southern Pacific and Union Pacific railroads. It operated the world’s largest plant in Roseville, near Sacramento.

Cutting 300-pound blocks of ice and moving them via a conveyer belt to the top of freight cars was a physically demanding job. Many of the workers were Mexican American. Latinos were among the key CIO leaders. 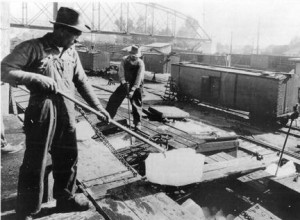 Ice being placed into the top of reefer cars. Photo courtesy of the Roseville Historical Society.

The CIO union sought strength through an affiliation with the United Cannery, Agricultural, Packing and Allied Workers of America (UCAPAWA).

Despite some initial organizing success, icehouse management in Roseville and Bakersfield signed contracts with the rival AFL Teamsters. It represented a lost opportunity to create a progressive voice for these Latino workers.

The United Railway Icemen’s Union quickly faded from the scene.

The production of ice continued for a number of decades until self-refrigerated cars replaced all of the older cars. The Roseville PFE plant stopped production in 1972 and was torn down in 1974.

This entry was posted in Books, California, Unions and tagged CIO, UCAPAWA/FTA. Bookmark the permalink.

3 Responses to United Railway Icemen’s Union and the PFE