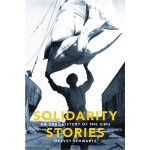 This week’s guest article is by labor historian Harvey Schwartz, author most recently of Solidarity Stories: An Oral History of the ILWU.

The International Longshore and Warehouse Union (ILWU) has been famous for seven decades for its progressive politics, internal democracy, corruption-free record, and inclusive stance toward ethnic and racial minorities.

Since its landmark victory in the 1934 West Coast maritime and San Francisco general strikes, the union has enrolled numerous Latino activists and rank-and-file members on the waterfront and in the warehouses and cotton compress plants of California. 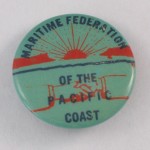 The Maritime Federation of the Pacific served as the umbrella organization for all the marine unions during the 1936-37 strike, which included Mexican Americans and Latinos from a number of South American nations. Buttons courtesy of Harvey Schwartz.

During the pre-union 1920s, numerous Mexican Americans worked in California along the Los Angeles/Long Beach waterfront. But by and large they were segregated into the most difficult and least desirable jobs. The majority labored as lumber handlers in segregated yards, where the work was dangerously fast-paced and the pay low. Many others cleaned ship’s boilers in unhealthy conditions that caused lung disease with appalling regularity. 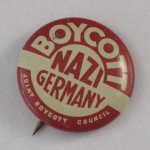 The ILWU was international in orientation from its inception. The union supported the democratic forces during the Spanish Civil War (1936-1939) and called for boycotts of German and Japanese-made products prior to World War II.

After the union’s victory in 1934, things began to change on the Southern California waterfront. Latinos started to get more decent jobs as longshoremen, although it took time to overcome entrenched discrimination against Mexican Americans. It actually took the labor shortage of America’s involvement in World War II between 1941 and 1945 for truly significant numbers of Latinos to enter the better waterfront jobs, including the most skilled positions like winch driver. During the post-war era, Mexican Americans assumed a central importance in ILWU longshore Local 13 at the Ports of Los Angeles and Long Beach. They served on local committees, were elected to union offices, and contributed to the ILWU in various other ways.

The decision by Harry Bridges and the ILWU to affiliate with the CIO gave new impetus for progressive civil rights and labor organizing.

There were also many Latino workers in the warehousing industry in downtown Los Angeles during the pre-union years. Organizing into a group that became ILWU warehouse Local 26 started there in 1936. The celebrated Mexican American social justice leader Bert Corona, who was a warehouse worker in his youth, was elected president of Local 26 in 1941. Corona also represented the union in the Los Angeles CIO Council.

In cotton compressing, a skilled trade in which huge cotton bales are reduced in size for storage and shipment, numerous Mexican Americans joined the ILWU in Bakersfield and Fresno during the 1950s. Many of the Latino ILWU workers in warehousing and cotton compressing became activists, organizers, and officers at various times.

For more on Latinos and the ILWU, see Harvey Schwartz, Solidarity Stories: An Oral History of the ILWU; Mario T. Garcia, Memories of Chicano History: The Life and Narrative of Bert Corona; Kenneth C. Burt, The Search for a Civic Voice: California Latino Politics.

This entry was posted in Books, California, Unions and tagged CIO, ILWU. Bookmark the permalink.

One Response to International Longshore and Warehouse Union