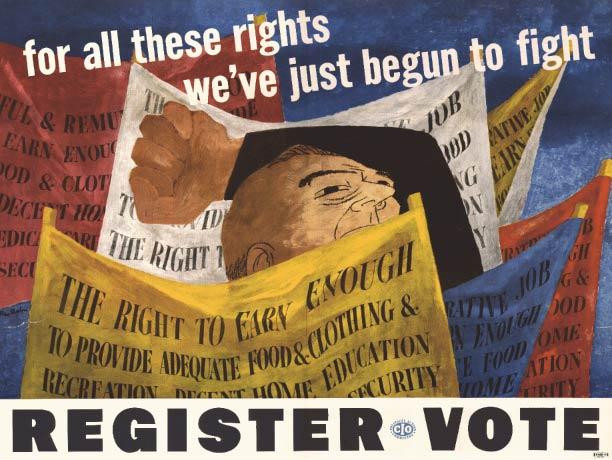 This colorful CIO-PAC poster was used by UCAPAWA/FTA Local 7, which stretched from Alaska to San Francisco. Latinos served as union officers and activists, although Filipinos represented the largest ethnic group in the local. Cannery Workers and Farm Laborers’ Union, Local 7, Special Collections, University of Washington.

The CIO believed that they could shape elections by increasing the number of working class voters who went to the polls. This was one of the lessons taken from the 1936 presidential election where millions of new voters helped reelect President Franklin D. Roosevelt, and supported candidates for state and local office.

The CIO-PAC was formed in 1943 and played a role in Roosevelt’s 1944 reelection and in Harry S. Truman’s election in 1948. This colorful voter registration poster was likely used during the 1946 congressional elections. Copies would have been displayed at union halls and on union bulletin boards within the many factories under contract.

This entry was posted in Unions. Bookmark the permalink.