Luisa Moreno was the highest profile Latina in the labor movement of the 1930s and 1940s. She was a truly exceptional woman who operated within the leftwing of Roosevelt’s New Deal Democratic coalition.

Luisa Moreno at the 1949 California CIO Convention. (Photo courtesy of the International Longshore and Warehouse Union Library and Archives)

A native of Guatemala, Moreno organized Puerto Rican agreement and restaurant workers in New York. She organized Cubans and Spaniards in Tampa for the Cigar Makers’ International Union (CMIU). Working mostly with Mexican Americans in the Southwest, she became a vice president of the United Cannery, Agricultural, Packing, and Allied Workers of America (UCAPAWA), which became the Food, Tobacco, Agricultural and Allied Workers (FTA).

Moreno faced deportation in the late 1940s for her leftist politics. Despite her many years in U.S., she had failed to complete the naturalization process. At the same time, the CIO was in the process of expelling member unions that followed the “Communist Party line”

Moreno addressed the California CIO Council to generate support for her case on October 15, 1949. The speech is reprinted here.

It feels rather strange for an old trade unionist like myself, to stand here, before this California CIO Convention, and talk not about the usual common problems, but about my own case.

But I will call it “mine” — in quotations only, for this is one of many cases, and should be viewed in its background, as the result of a new trend in this country.

I, and other trade unionists are among the first victims of this reactionary trend. We have a duty towards you, towards the workers you represent, to explain our cases and place them in their true light.

Strange things are happening in this land, and only when the truth is widely known, can we put a stop to them.

I need not speak in my defense before you. Many of you know me since 1940, for I participated in seven annual conventions of this California CIO Council. And the delegates of your unions and of the unions who are tragically absent, elected me five terms as one of the vice presidents of this militant state organization.

You also know that I resigned in March 1947, thinking erroneously that I had the right to become a housewife and enjoy the privilege of being a grandmother. But that was a passing fantasy, for out of the blue sky, one early morning I received a summons to appear before Jack Tenney’s very un-American Committee.

My answer was that the Constitution of the United States was more important to me than citizenship.

At that time, as my lawyer Robert W. Kenny put it, “A dead cat sailed over the fence to hit me.”

This last summer, the dead cat, became very much alive and turned into a howling panther.

“Madam, it appears that you, while walking in the park, with your grandchild, while going about your daily routine at home, while growing and experimenting with a vegetable garden and studying American Indian lore — you have suddenly become a menace to this country, and must be deported.”

These were not the words used in the warrant, but the actual facts are there.

Strange things are happening in this land. These threatened exiles of long time resident are conveniently cloaked with certain legalities.

But it’s a rather thin coat, made out of some plastic fabric — the brand is the Smith Act of 1940. This was an omnibus bill, that if allowed to stand will eventually completely abolish the Bill of Rights and make drastic constitutional changes — changes, not amendments.

In the case of so-called aliens, like myself, the said law claims to have the power of retroactivity. Does this not violate Section IX, Part 2 of the U.S. Constitution?

What can happen if illegalities mount into pyramids? You know the answer. I knew it very early in my life and because I knew it, I am standing here before you today, asking you to assist in sounding the alarm.

For I was born in a tragic land, a land in bondage, although the people had so loved liberty that the national symbol was a bird that immediately dies in captivity. That is the bird called Quetzal.

But in this country of the Quetzal, there was once a constitution, a fine old document that torn to pieces was used to stuff the murdered symbol of liberty. Then this piece of taxidermy was mockingly used to adorn government offices.

The sad people of Guatemala slaved, suffered and hardly to think for 22 long years. Fear was everyone’s byword. Even the children were afraid. They were cautioned that the wall had ears — that tragedies they saw must be hushed.

And the children solemnly had to march yearly, dressed in white, carrying flowers in homage to the tyrant, a servant of foreign interests. So when my sister and I were questioned by our teachers for not attending the ceremony, our parents thought it best to bring us here, to a Catholic boarding school. My father found it repugnant to pay homage to this tyrant.

That was a sad land and a sad people. When we returned in 1921, a physical earthquake had destroyed our city: it was being rebuilt. A political earthquake had done away with the tyrant — for a brief spell only — for soon there was another pseudo Hitler. A 13-year scourge, this time.

You can not realize how difficult it is for a Latin American country to be truly democratic. Foreign intrigue plays too big a part in the affairs of Latin America. In most cases the people do not have a chance.

Some of the aliens that go there, conspire to destroy democracy. This Latin American alien came here to assist you in building and extending American democracy.

From New York to Florida, from Florida to Texas and California, in several states in many cities and towns I became a part of the struggle to strengthen old AFL locals, to build and extend CIO locals — for better working conditions, for more pay, for improvements in the deplorable conditions of women workers, Negro workers, Mexican workers. Many times we tried and failed partially; but most of the time we were successful. 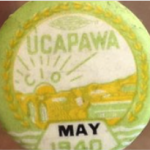 Moreno served as a national vice president of UCAPAWA.

Sometimes the struggle was mean. We fought in the midst of KKK terror. We were jailed for daring to strike. We fought desperately for the right to organize! You also remember all this! Most of you have lived it, too.

Then, in my case, after investing the years of my life, seeking no posts of honor nor financial wealth, but simple peace — after this investment, the dividend is paid, in a most un-American manner; with a deportation warrant!

Strange things are happening in this land. Things that are truly alien to traditions and threaten the very existence of those cherished traditions.

For that reason, I stand before you as a rank and file member of a union out of retirement. Forced to speak up in my own defense against conditions that make such persecutions possible. Those conditions are the main thing, for they will also affect you and they will affect even those unions that called themselves “right wing.”

How poor is the memory of those right wing leaders that are blind to reason — who refuse to see that the interests of labor and the people are one — that the delegates in this hall are the same ones that fought with them shoulder to shoulder for the good of the entire CIO members?

They fail to see that the attacks against some of us will later be extended to them and their unions. They have forgotten the story of Germany, the story of Spain, the story of France.

They have forgotten that united we stand — that all the bona fide union in other civilized countries were crushed, and the labor leaders of the right and left shook hands in concentration camps!

Perhaps they do not see the new Bridges case is a warning signal for all West Coast labor – that it symbolizes a desperate effort to tear down union conditions built in 15 years of struggle.

Allow the ILWU to be attacked and beheaded and the backbone of militant West Coast labor will become a myth and a shadow.

In a brief filed before the Supreme Court recently by Alexander Mieklejohn, on the case of the Hollywood Ten, an interesting picture is drawn of the strange happenings in this land. The brief points to the rise of the triangle of pressure — terror, corruption and propaganda. It states that the combination of these three agencies constitutes the mental climate of dictatorship.

Yes, tragically, the unmistakable signs are before us — before us, who really love America. And it is we who must sound the alarm, for the workers and the people to take notice. For it seems that today, as the right to organize and strike was fought and won, as the fight against discrimination is being fought but far from won, so the fight for the very fundamentals of American democracy must again be fought for and reestablished.

How long will the Steelworkers, the Mineworkers, any organized workers keep their gains, after basic civil rights are destroyed? How long after that will all unions be harnessed into company unionism or destroyed?

Fear that slowly brews into terror as the Smith Act blankets the land, covering under its legal cloak, persecutions unheard of in America. Corruption – you and I know how efforts are being made to pollute labor’s ranks, to turn labor leaders and rank and filers against each other, to create new “cases” and greater corruption. Point out, that the golden carrot that dangles, from the hands of reaction, covers a vicious rattlesnake; for no scab, stoolpigeon or renegade has ever been known to serve the interests of the people. As for the third side of the triangle of pressure — propaganda. That abundant form of poison was already flowing in the New Deal era, and today, picks up new force and viciousness. There is much general propaganda against the “alien menace,” but not a word regarding the fact that grandmothers like me, are the victims of such trash.

I feel confident, for my defense is in your powerful hands and the hands of the liberal minded people in this country. You will return to your locals to sound the alarm and work for a turn in the tide.

You and the workers you represent can do the job.

The words of the great American socialist, Debs, comes to my mind:

“THE COURT OF FINAL RESORT IS THE PEOPLE, AND THAT COURT WILL BE HEARD FROM IN DUE TIME . . .”

One Response to Luisa Moreno’s 1949 Address to California CIO