Hispanic workers were among the first to join a union, starting with the Cigar Makers’ International Union (CMIU), which was founded in 1864. Cubans, Spaniards and Puerto Ricans labored at workbenches in New York, Philadelphia, and Key West, Florida.

The first Hispanic to head a national union rose from these ranks. Mario Azpeitia served as president of the CMIU for two decades, from 1948 to 1969.

Azpeitia grew up in Key West, Florida, a Hispanic community where craftsmen used Cuban tobacco leaves to produce internationally renowned cigars. He followed the bulk of the cigar factories north to the Tampa neighborhoods of Ybor City and West Tampa. These Spanish-speaking enclaves soon became the cigar capital of the United States.

The two-story Centro Obrero de Ybor (Labor Temple) served as the center of the Tampa labor movement. But the cigar makers, the most knowledgeable sector of the working class, concerned themselves with far more than wages and working conditions. For decades they had supported liberation struggles in Cuba, Puerto Rico, and Spain. José Martí used Tampa as his U.S. base of operations as he sought to drive Spain out of Cuba.

In the mid-thirties the cigar makers became part of President Franklin Roosevelt’s New Deal Democratic Party. They helped elect progressive Claude Pepper of Florida to the U.S. Senate. They also backed the progressive Popular Front government in Spain and championed the cause during the Spanish Civil War of 1936-1939.

Azpeitia rose within the union during this era. In 1935, at age 36, he joined Local 500 in Ybor City, the largest and most militant local within the national organization. He was elected general secretary in 1940. From there he became a vice president of the national union.

The job involved more than a little controversy.

Immediately after World War II, Azpeitia and two other CMIU vice presidents signed a statement sponsored by the Civil Rights Congress deploring the attacks on civil liberties. The House Committee on Un-American Activities criticized him for associating with the organization because it was believed to be linked to the Communist Party.

In 1948, with cigarettes having largely replaced cigars, Tampa remained alone as a major producer of hand-rolled (as well as machine-made) cigars.

The CMIU recognized Azpeitia’s leadership and elected him president at its convention in Philadelphia. He helped maintain working standards for an aging workforce. Efforts to grow the union by organizing new shops proved frustrating, however, as the industry continued to shrink and the U.S embargo on Cuban tobacco after Fidel Castro assumed power hurt business.

Azpeitia assumed his role as a labor movement statesman. He joined other AFL-CIO leaders for a meeting with President John F. Kennedy at the White House. He also presided at the union’s 100th birthday celebration in 1964.

He also enjoyed a family that included five children and a social life in which membership in El Círculo Cubano and El Centro Español provided a link to glory days when Hispanic life in Florida was organized around the cigar factories.

The cigar factories may be gone but, on this Labor Day, the spirit of the iconic craftsmen lives on in the immigrants and in their U.S.-born children who continue to come together to improve their collective lot and to transform the larger society.

This column was distributed by the Hispanic Link News Service. It ran in English and Spanish in  Ponte Al Día in Philadelphia, and in La Gaceta in Tampa and La Opinión in Los Angeles. 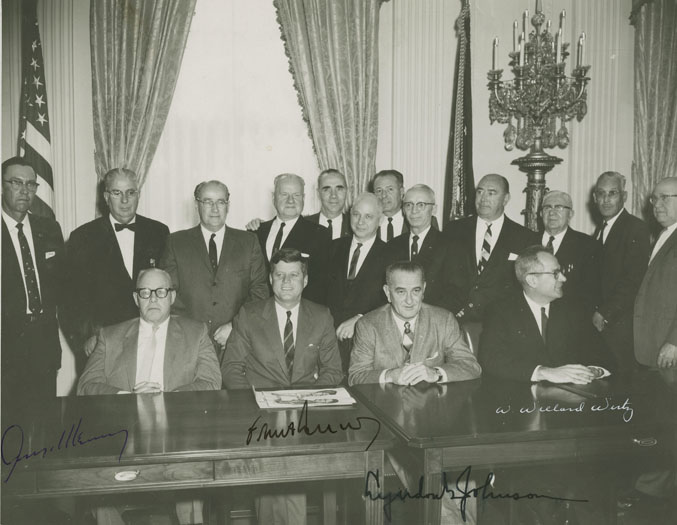 This entry was posted in Activist Profiles, South, Unions and tagged CMIU. Bookmark the permalink.