Numerous books, movies, and museum exhibits have examined the role of idealistic Americans who went to Spain to serve in the Abraham Lincoln Brigade, which fought on behalf of the Spanish Republic against rebellious elements of the army, led by General Francisco Franco, and their allies Nazi Germany and Fascist Italy. 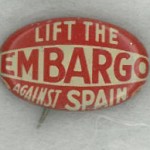 U.S. "neutrality" led to an embargo of the democratically elected government. (Buttons courtesy of the Southern California Library for Social Studies and Research)

Hispanic Americans have received little if any mention in most accounts of the Spanish Civil War (1936–39). One of the few to recognize Spanish-speaking volunteers from North America was John Tisa, a brigade leader who afterward came home and became a cannery worker organizer for the CIO-affiliated UCAPAWA/FTA.

Tisa, in his book Recalling the Good Fight: An Autobiography of the Spanish Civil War (South Hadley, MA: Bergin & Garvey Publishers, 1985), recalled going to Spain with a group of Cubans, who were part of the Spanish Harlem–based “Julio Mella Club, a leftwing organization comprising mainly Cubans, many of whom were refugees from the Batista dictatorship.”

U.S. volunteers of Spanish, Cuban, and Puerto Rican heritage fought in the civil war, along with a smaller number of Mexican Americans. Records are incomplete, but it appears that the largest number came from New York, Philadelphia, and Tampa. These three cities shared a Hispanic left centered in the cigar industry.

Activists in Spanish Harlem and Ybor City/West Tampa took the lead in demonstrating in favor of the republic and played a significant role in raising funds to buy ambulances and running used clothing drives to aid war-torn civilians.

Progressive Mexican Americans in the Southwest also supported the cause, which grew in importance after Mexico became one of only two nations (the other being the Soviet Union) to back the embattled democracy. 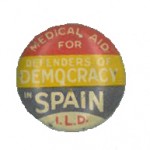 The First National Congress of the Mexican and Spanish-American Peoples of the United States, familiarly known as El Congreso, adopted an anti-Nazi resolution in Los Angeles in March 1939, shortly before the fall of the Spanish Republic.

The U.S. stayed out of the conflict due to the widespread isolationism that continued up until Pearl Harbor in 1941. In addition, the Catholic Church, an important component of the New Deal Democratic coalition, allied with Franco. 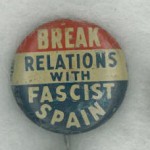 The Allies defeated Hitler but left General Franco in charge of Spain.

Today, the struggle in Spain is remembered as the opening chapter in what became World War II: the last chance to stop Hitler short of a full-fledged fight that engulfed the entire planet.

The Spanish Civil War retains particular resonance on the American Left. The war served as a radicalizing event that proved a recruiting ground for the Communist Party during the heyday of its Popular Front of liberals and the left who opposed the growing threat of fascism.

Panamanian-born, New York–raised office worker Judy Boudon left the insurance industry to work with the Friends of the Abraham Lincoln Brigade; she also joined the Communist Party. Boudon felt the conflict deeply, as her parents were Spanish and it seemed the Soviet Union was taking the lead aiding Spain.

While the left played a huge role in rallying support for Spain, progressives of all stripes and nationalities identified with and assisted the cause. The specific role of Hispanics in the cause needs further academic study.