Los Angeles has provided a vivid tapestry for those interested in the long struggle for civil rights, organized labor, and the liberal left. The Cold War remains contested territory.  Zaragosa Vargas illustrates the dominant narrative when he concluded in his 2005 book, Labor Rights are Civil Rights: Mexican American Workers in Twentieth-Century America: “For America’s minorities, the anticommunism undermined interracial unionism, undid the civil rights-trade union alliance, and set back the fight for full citizenship.” (page 284) 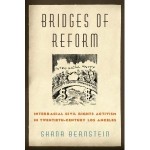 Shana Bernstein seeks to establish a new narrative in her study of African American, Asian, Latino, and Jewish Los Angeles. Her Bridges of Reform: Interracial Civil Rights Activism in Twentieth-Century Los Angeles (New York: Oxford Press, 2011) charts the parallel developments within each ethnic/racial community, focusing on how these groups gained strength by working together, bilaterally at times and in some cases collectively. She investigates political developments during the early days of the Cold War in terms of placing civil rights liberalism in an American context, while examining how liberal civil rights organizations separated themselves from leftists to obtain legitimacy needed to achieve their goals.

Bernstein has a particular interest in the Mexican American community. She effectively contrasts El Congreso, a Popular Front group (whose leaders included Communists) that existed roughly between 1938 and 1944, with the Community Service Organization (CSO), the Saul Alinsky-sponsored organization whose activist membership achieved success between 1947 through the 1960s. (For full disclosure, she cited my own research on CSO, labor, and the liberal-left.)

Bernstein stresses how the CSO—which helped elect Edward Roybal to the City Council in 1949, battled employment and housing discrimination, and confronted police abuse—shielded itself from charges of being Red by avoiding formal affiliations with those labeled as Red and through its close association with the Catholic Church and liberal anticommunist labor unions.

Bernstein describes how CSO organizer Fred Ross worked with activist Carey McWilliams to strategically communicate with leftists. But CSO ultimately decided not to have him serve on a formal advisory board because of his leftist ties. CSO likewise worked with but did not formally affiliate with the Asociación Nacional México-Americana (ANMA), successor to El Congreso.

Bernstein concludes: “The story of the CSO’s creation and its early years indicates that anticommunism did not stifle civil rights activism as has often been assumed. In some ways, the Cold War even facilitated ongoing interracial collaboration among certain civil rights reformers.” (p. 183)

My extensive research and writing about CSO—which is partly based on interviews with members and early leaders—shows that while CSO leaders were decidedly not communists, and they did benefit from not having communist ties, CSO was not organizationally anticommunist. It was founded to empower the community and to address community issues, starting with the lack of streetlight and stop signs that made it unsafe for children and adults to walk in the metropolitan community of Boyle Heights.

Bernstein also overlooks major differences between CSO and the NAACP and the CRC on the issue of communism: the latter two groups actually purged Communists from its ranks. CSO remained open to all who shared its goals of empowering the community even as its leaders worked to ensure that the organization was not taken over by people loyal to another organization. Moreover, a number of CSO leaders saw themselves as radicals (as did Alinsky) in terms of believing that the United States should live up to its noble ideals.

Bridges of Reform is highly interpretive and richly documented. This important book will strongly motivate scholars to reexamine the impact of the Cold War on civil rights in Los Angeles and beyond. It should be read by those interested in gaining a better understanding of civil rights, coalition politics, and the strategic and ideological developments in 1940s and early 1950s Los Angeles.