Pioneering Latino elected official Edward R. Roybal, the first Mexican American to serve on the Los Angeles City Council in modern times, also held the distinction of being the first Hispanic to serve as a major party nominee for statewide office in California: the Democratic Party nominated Roybal to run for lieutenant governor in 1954. 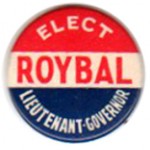 Campaign button from the 1954 race. Five decades later only one Mexican American has served in the office.

Popular within liberal, labor, and minority circles, Roybal won praise from grassroots Democratic activists who met in 1954 under the aegis of the newly organized California Democratic Council (CDC) to endorse a slate of statewide candidates. CDC’s immediate objective was to ensure a full complement of Democratic candidates on the November ballot by defeating the cross-filing Republicans in the primary. This would be easier than in past years because, due to a voter-passed initiative, the ballot would list each candidate’s party in legislative and constitutional offices for the first time in years. The larger goal was to use the election to strengthen the Democratic Party so that it would be able to compete with the entrenched Republicans four years hence.

Fred Ross, the Industrial Areas Foundation’s West Coast director, was among those most excited by the prospect of the Roybal candidacy. In a letter, Ross expressed how the Roybal campaign would animate the Community Service Organization (CSO) that held its first statewide convention the same year. In a letter to Roybal, Ross stated:

I don’t have to draw a picture for you of the importance of this decision both with regard to the morale-heightening effect it will have on the Spanish-speaking people of California, facilitation of CSO’s program of voter registration and membership, as well as the opportunity the campaign will provide for establishing the name of Roybal as a household expression throughout California.

In addition to Mexican Americans, Roybal’s low-budget campaign for lieutenant governor “relied pretty heavily on organized labor and organized CDC groups, and other Democratic groups,” according to Roger Johnson. Support was strongest from CIO and progressive AFL unions, like the needle trades—the constellation of groups that proved central to Roybal’s election to the city council in 1949.

For the November 1954 election, Roybal traversed the state by automobile, campaigning before a variety of audiences. In San Diego, Roybal “was very strongly supported by the community,” said educator Armando Rodríquez, a World War II veteran inspired by Saul Alinsky’s vision for Latino self-empowerment.

The campaign also used technology to reach beyond the ethnic organizations. “We had a secret weapon. Every time we would go into a town, a small town, no matter how small, we would have access to the [Spanish language] radio,” said Roger Johnson. “This was a very important thing in getting people to be interested in Roybal, and also to get active.”

Many of those hearing about Roybal over the radio were newly registered voters. This was particularly true in places like San Jose where Eduardo Quevedo introduced Roybal to a bilingual crowd at a rally at the Civic Auditorium. The excitement over having a Mexican American on the ballot likewise reached into the Central Valley, according to Richard Chávez, who helped organize CSO in Kern County.

Campaign buttons reflected the grassroots nature of the campaign.

Roybal also received help from Lucretia del Valle Grady. The state’s former Democratic national committeewoman headed the state women’s committee for Roybal. Her father had served in the state Senate in the 1880s and her grandfather was an early mayor of Los Angeles after statehood in 1850.

Despite these efforts, Roybal and all but one of the statewide Democratic candidates, Pat Brown, lost their respective races. However, Roybal emerged from the process with enhanced stature because of his energetic campaigning and his receiving more votes than the party’s gubernatorial candidate. He went on to become, in 1962, the first Mexican American elected to Congress in the modern era.