This piece originally appeared on the website of Capital and Main, dedicated to investigating power and politics, on September 24, 2014. The author serves on their board.

The police stop a young man. An officer shoots, killing him. The officer claims self-defense, that the killing was warranted.

The community, having endured years of unequal treatment at the hands of law enforcement and other municipal agencies, responds in anger. Protests ensue. Hard feelings persist, as do demands for law-enforcement accountability.

Sound familiar? No, this is not the case of 18-year-old Michael Brown in Ferguson, Missouri. The young man in question was Augustin Salcido, 17, and the incident occurred in Los Angeles more than six decades earlier. The Internet did not exist at that time and local television audiences were miniscule, so the Civil Rights Congress of Los Angeles produced a pamphlet, Justice for Salcido. In its introduction, author and civil rights advocate Carey McWilliams described the killing as part of a historical pattern of “continued suppression of the Mexican minority.” 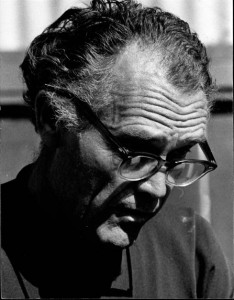 Fred Ross, organizer for a new group known as the Community Service Organization (CSO), recognized the all-too-prevalent problem of police brutality—and the familiar, ineffective community response. The pattern practiced by groups such as the Civil Rights Congress included protests that failed to address the underlying powerlessness of the community.

“They never win any of their cases—no power—so the people have gotten discouraged and won’t listen to the congress anymore,” said Ross, who posited that members of the community could not change the bias in the hearts of the offending officers, but the community, if properly organized, could use political power to alter behavior.

After all, the police worked for the city.

The fact that not a single Latino (or African American) served on Los Angeles’ 15-member City Council presented a problem. Worse yet, few Mexican Americans bothered to vote, eliminating pressure on the incumbents to speak out.

Ross and the CSO leaders settled on a three-step program to change the power dynamic in Los Angeles.

First, they undertook “house meetings” wherein CSO leaders explained to community members the importance of working together through the CSO to address community concerns.

To make real this potential game-changing bloc of new voters, CSO needed to demonstrate that they would actually go to the polls. So, in a nonpartisan fashion, CSO ran a massive get-out-the-vote drive for the 1948 election.

The successful voter engagement provided the community with a new sense of power. It also provided a civic laboratory to teach practical electoral skills to newly organized CSO activists, altering their relationships with other community groups. CSO and the Latino community were now perceived as reliable community partners that could deliver at the polls.

This led to the development of new coalitions. Most important to the inchoate CSO were the Jewish community, organized labor and smaller groups of blacks and Asians.

This multicultural coalition elected CSO president Edward Roybal to the Los Angeles City Council in 1949, making him the first Latino elected to that body in modern times. He advocated for Latinos as well as for blacks, Jews and Asians who did not yet have representation on the council.

Two years later, in a police beating case known as Bloody Christmas, Councilman Roybal (later a member of Congress) and his progressive community allies forced the city to punish the offending officers.

This case impacted Latinos far beyond Los Angeles. Seeking to expand CSO beyond the city, Fred Ross began to organize in San Jose. One of his first house meetings included a young Cesar Chavez, then working in a lumberyard.

“I didn’t know what CSO was, or who this guy Fred Ross was, but I knew about the Bloody Christmas case, and so did everybody in that room,” recalled Chavez. “Five cops actually had been jailed for brutality. And the miracle was the result of CSO efforts.”

Chavez joined CSO. Ross mentored him and other young activists such as Dolores Huerta. The three worked closely together in CSO through the 1950s and into the ’60s, at which time Chavez and Huerta left the organization to form what became the United Farm Workers. Ross advised the UFW leaders and at key moments helped organize in the fields and with the urban grape boycott.

Looking back, we clearly see that the quiet and unassuming Ross changed history in a profound way. He empowered the growing Latino community, bringing it into the political mainstream earlier than might have occurred.

Ross’s legacy is also in the people he mentored and in those they, in turn, trained. California’s three greatest Latino icons—Roybal, Chavez and Huerta—in all probability would not have emerged as civic giants had it not been for Ross.

California is set to posthumously recognize Ross on October 1, when Governor Jerry Brown will induct the community organizer into the California Hall of Fame of the California Museum.

Ross’ fundamental insight, that ordinary people can achieve extraordinary results though organizing, needs wider recognition in California—and in cities across the nation, starting in Ferguson.