President Franklin D. Roosevelt arranged for the Democratic National Convention to nominate Henry A. Wallace as his vice presidential runningmate in 1940. Wallace was an Iowa farmer who had served two terms as FDR’s Secretary of Agriculture

The campaign released a Roosevelt-Wallace button that featured an ear of corn. Corn was Iowa’s principle crop, and the Democrats were courting family farmers who were then trending back to their Republican roots.

In 1940, the state had a small Latino community. Mexican American had come to Iowa not to pick crops, but to work on the railroad. 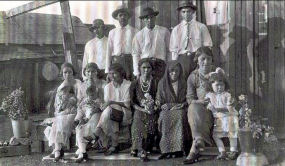 Latinos in Iowa in early 1900s

The people of Iowa did tip their hat to their Mexican neighbors during this era when the federal government actively promoted a Good Neighbor policy towards Latin America.

The U.S Post Office in Ames, Iowa boasted a mural, “Evolution of Corn,” which linked the Aztecs and Iowa farmers.

Four decades later, in 1974, the state established Iowa Commission of Latino Affairs, from which this historic photo was used.

"Evolution of Corn" mural painted in 1938 at the post office in Ames, Iowa

One Response to Roosevelt, Wallace and Iowa Latinos