In 1956, Democrat Adlai Stevenson, the former governor of Illinois, challenged President Dwight Eisenhower to a rematch. The results were similar to their 1952 contest: the Democratic nominee carried only a few states in the South and border region. 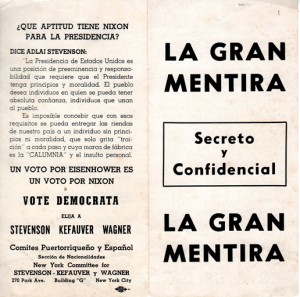 The front and back panels of the pro-Stevenson circular.

The Stevenson campaign operated a limited Latino outreach effort, organized by the Democrat’s Nationality Division, which reached out to some two dozen ethnic groups, often in their own language. This followed a pattern perfected by President Franklin Roosevelt, for whom the foreign-born and their children represented a key constituency.

President Eisenhower courted Latinos in 1952 and 1956 more aggressively than any previous Republican. His was, for example, the first campaign of any party to issue Latino-oriented campaign buttons, which not even Roosevelt had done.

A small circular, entitled “The Big Lie,” published by the Puerto Rican and Spanish Committee, a unit of the Nationalities Division of the Stevenson-Kefauver and Wagner [for U.S. Senate] campaign in New York City. 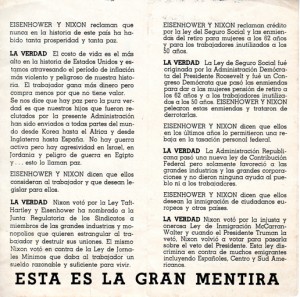 The inside panels of the campaign piece issued by the Puerto Rican and Spanish support committee in New York.

It is translated below to provide a feel for the tenor of the campaign and the issues involved. Note the appeal to New York Puerto Ricans and Spanish Americans (some of whom had escaped fascist Spain) as workers and new arrivals.

It is significant that the circular directs anger at Vice President Nixon, who voted for both the mentioned Taft-Hartley Act, which undercut labor’s collective bargaining rights, and the McCarran-Walter Act, which made it easier to deport immigrants. Nixon was likewise resented in progressive circles for his tactic of insinuating—if not outrightly accusing them—that certain people were communists in order to advance his career.

EISENHOWER and NIXON claimed that never before in the history of this country had there has been so much peace and prosperity.

THE TRUTH: The cost to life is the highest in the history of the United States and we are crossing the most violent period of inflation and danger in our history. The worker earns more money, but he buys less because it has no value. It is said to us that there is peace, but the pure truth is that our children were recruited by the present administration and sent all over the world from Korea to Africa and from England to Spain. There is no active war but there is aggressiveness in Israel and in Jordan and danger of war in Egypt and . . . they call this peace.

EISENHOWER AND NIXON say that they consider the worker and that they will legislate that way.

THE TRUTH:  Nixon voted for the Taft-Hartley Act and Eisenhower has named to the board that regulates trade unions (National Labor Relations Board) members of the big industries and monopolies that want to strangle the workers and destroy their unions. The same Nixon voted against the minimum wage law that gives the worker a reasonable and sufficient salary on which to live.

EISENHOWER AND NIXON claimed credit for the Social Security Act and the amendments for women at age 62 and disabled workers at 50.

THE TRUTH: The Social Security Act was originated by the Democratic administration of President Roosevelt and it was a Democratic Congress that passed the amendments to give women a retirement pension at 62 and disabled workers at 50. EISENHOWER AND NIXON fought these amendments and tried to defeat them.

EISENHOWER and NIXON say that in recent years they reduced federal taxes.

THE TRUTH: The Republican Administration passed a new law that favored large industries and corporations and gave no help to the people and none to the workers.

EISENHOWER AND NIXON say they want immigration of Europeans and other peoples.

THE TRUTH: Nixon voted for the unjust and onerous McCarran-Walter immigration law and, when President Truman vetoed it, Nixon helped override his veto. This law discriminates against many immigrants, including Spaniards and Central and South Americans.

What ability has Nixon for the presidency?

“The presidency of United States is a position of prominence and responsibility that requires the president to have principles and morality. The people want individuals in whom they can have absolute confidence, individuals who are one with the people.

“It is impossible to conceive that, with these requirements, we can deliver the reins of our country to a person without principles or morality, who just screams “treason” and generates slander and personal insult.”

A Vote for Eisenhower is a Vote for Nixon

This entry was posted in Northeast, Presidential Politics and tagged Eisenhower, Nixon. Bookmark the permalink.